By purchasing one of our sponsorship gift packs you will be directly contributing to the costs involved in caring for your chosen animal. You can choose from a wide range of animals here at the shelter!

Our sponsorship are just £30, and make great gifts! When you sponsor an animal you or your chosen recipient will receive:

A Personalised Certificate of Sponsorship!

Information on your chosen animal!

Sponsoring an animal is really simple. Just click the link below, fill out the form, and send it back to us via e-mail or post. Once we have received your form and payment, we will send your pack out to you or your chosen recipient!

Check out our resident animals looking for sponsorships below! 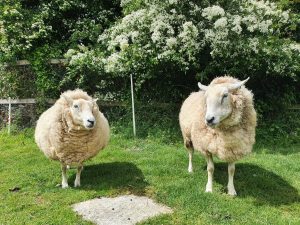 Hetty and Jacob are our resident sheep and they make themselves known! They have huge personalities and LOVE their food! Unfortunately they have some health complications and so live with us here at the shelter where they enjoy grazing in our two fields and saying hello to the ducks! 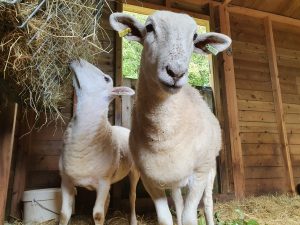 Bella (left) and Bernard (right) came in to us in September 2022 at six months old. Both are obsessed with food. Shortly after arriving Bernard became dangerous ill and it was touch and go for several weeks. Thankfully with veterinary help Bernard has made a good recovered.

After his owner passed away Chick became one of our resident degu’s. Don’t be fooled, he may be one of our smallest residents but he has one of the biggest personalities! He is the sweetest little man you could hope to meet. He loves a head scratch and always waits patiently for his daily pea flake!

Rocky was one of a number of poultry that was abandoned in local woods. Luckily surrounding people came and fed the poultry daily until they were all caught and rehomed. Thanks to the amazing teamwork.

Camila came in because her owner was elderly, originally with another group of chickens. Camila’s friends passed away so she was living on her own with Rocky, until a group of nine needed to come in as their owner was sick. They are lovely girls who come running over to us to see what we’ve bought them for lunch. They are a cheeky bunch who will climb all over us as well.

Misty came into the shelter in July 2019. Her previous owner had kept her tethered, so she could not run off but unfortunately the horse would tangle in the chain and end up kicking the goat. When Misty first came to us she would forever bleat at us for attention but she has since made friends with Toffee and Ericka. 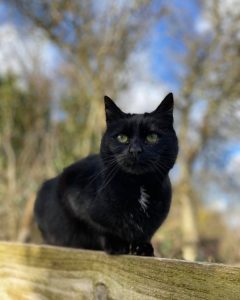 Shadow is such  a sweet, friendly cat. We cannot understand why she decided to live with us but one winters day she showed up in the poultry enclosure and started to live with the ducks, sleeping in their house. At first, we thought she was just visiting us but then realised this was not the case. After unsuccessfully not finding her family, we decided that she needed to stay with us. Shadow has upgraded to living in the tool room with her own bed, where she can come and go as she pleases. Most people meet shadow when she runs out to greet a visitor at the gate. 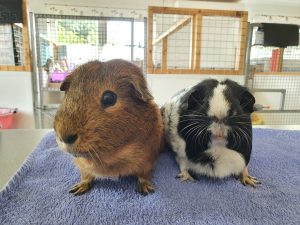 Copper started loosing weight and has been treated for multiple health problems. He’s been at the shelter since November 2020 and is now on long term treatment for arthritis. Copper lives with his partner Mini, who also had health problems, although has made a full recovery. Copper is a firm favourite amongst staff because he is gentle and friendly. Mini, who also came to the shelter in November 2020, likes to pose for the camera.

Ralph and Tinker came into the shelter together in January 2021. Ralph (right) is 8 years old and his girlfriend Tinker is 7 years old. They are both lovely bunnies. Ralph is friendly and quiet and Tinker is a bit more playful. Nobody has been interested in adopting them since they came in so they have become residents. Ralph as an older bunny has arthritis. 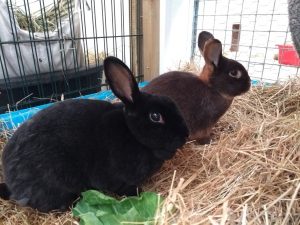 Missy and Fudge came in as a pair because the owner had a new baby and no longer had time for them.  They were signed over to us in 2021. We noticed that Missy was not walking correctly and would lean to one side. She was also very messy and seemed to urinate everywhere in her pen. Her droppings were small and sometimes Fudge would chase her. Missy has had tests done and it looks like she is in Kidney failure or has a tumour. She is on daily pain medication and life is more positive for her although we don’t know how long she has left. Hopefully she will continue this way for a long time.